The National Immunisation Advisory Committee (NIAC), an expert Committee of the Royal College of Physicians in Ireland has recommended the introduction of vaccines to protect against Meningococcal B (MenB) and rotavirus diseases so the HSE Primary Childhood Immunisation Schedule will change significantly for all babies born on or after 1st October 2016. The introduction of these two new vaccines means there will be a change in the vaccines given at each of the five visits in the childhood vaccination schedule. Payment for the new schedule is currently under negotiation.

Children born before 1st October 2016 should receive the old schedule regardless of when they present for vaccination. This means that the 2 schedules will be in place for at least 12 months and the child’s date of birth should be checked to determine which schedule to give.

What are the changes?

The table below summarises the changes to the immunisation schedule for babies born on or after 1st October 2016. 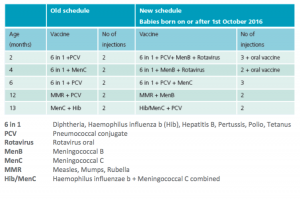 To allow for earlier protection of meningococcal B infection.

To minimise the number of injections given at 13 months

Why are the new vaccines recommended?

Rotavirus disease is very infectious and the most common cause of gastroenteritis in children in Ireland under the age of 5 years. Whilst most babies and children will recover at home, almost 1000 children per year will become significantly dehydrated and require hospitalisation with an average length of stay of 5 days. This is a significant burden of disease to young families and one that is now vaccine preventable.

How are the new vaccines given?

The MenB vaccine is an injected vaccine which should be given to babies in their LEFT anterolateral thigh.

Are the new vaccines safe and effective?

Yes, all vaccines undergo rigorous safety checks before they are licensed for use and are continually monitored after licensure.

What’s new about the vaccines?

The MenB vaccine when given with other vaccines can increase the risk of fever in babies under 12 months of age. All babies should be given 3 doses of 2.5 mls (60 mg) liquid infant paracetamol at or just after their 2 and 4 month vaccines and 4-6 hours later, respectively, for the second and third doses.

This will reduce the severity of any fever and the risk of a baby developing a fever by approximately 50%.

that a fever is likely over the first 24 hours after vaccination. Prophylactic paracetamol is not recommended when MenB vaccine is given at 12 months as the rate of fever is the same as for the other childhood vaccines.

Rotavirus vaccine cannot be given on or after 8 months and 0 days of age as the risk of intussusception (intestinal prolapse leading to obstruction) is greater in older childrenIn Ireland, approximately 1 in 1500 babies will develop this condition naturally, most commonly between the ages of 5 months and 1 year.

Babies with intussusception have pain similar to a severe colic, accompanied with bouts of crying. However, they generally become very pale during episodes, rather than flushed as they might with colic, and they may draw their legs up. The episodes become more frequent over a few hours and are associated with vomiting or blood in their stools. If this occurs then the baby needs to be urgently referred to hospital for investigation. The sooner a baby is identified and referred to hospital, the less likely they are to need an operative intervention. As the risk of intussusception increases with age, babies should not be given rotavirus vaccine at 8 months and 0 days or older.

Further details on these vaccines, are provided in the new immunisation information materials for parents and for healthcare providers, and on the www.immunisation.ie website. Your local immunisation office, local public health departments and the National Immunisation Office are available to assist with any questions that you may have.

The new childhood immunisation schedule will provide protection to infants and young children against serious diseases when they are most vulnerable.

Elyce McGovern is a Specialist Registrar in Public Health Medicine currently working at the National Immunisation Office. She is a vocationally trained GP who previously worked as a GP in Dublin and Wicklow.

"please confirm that you are a medical professional"